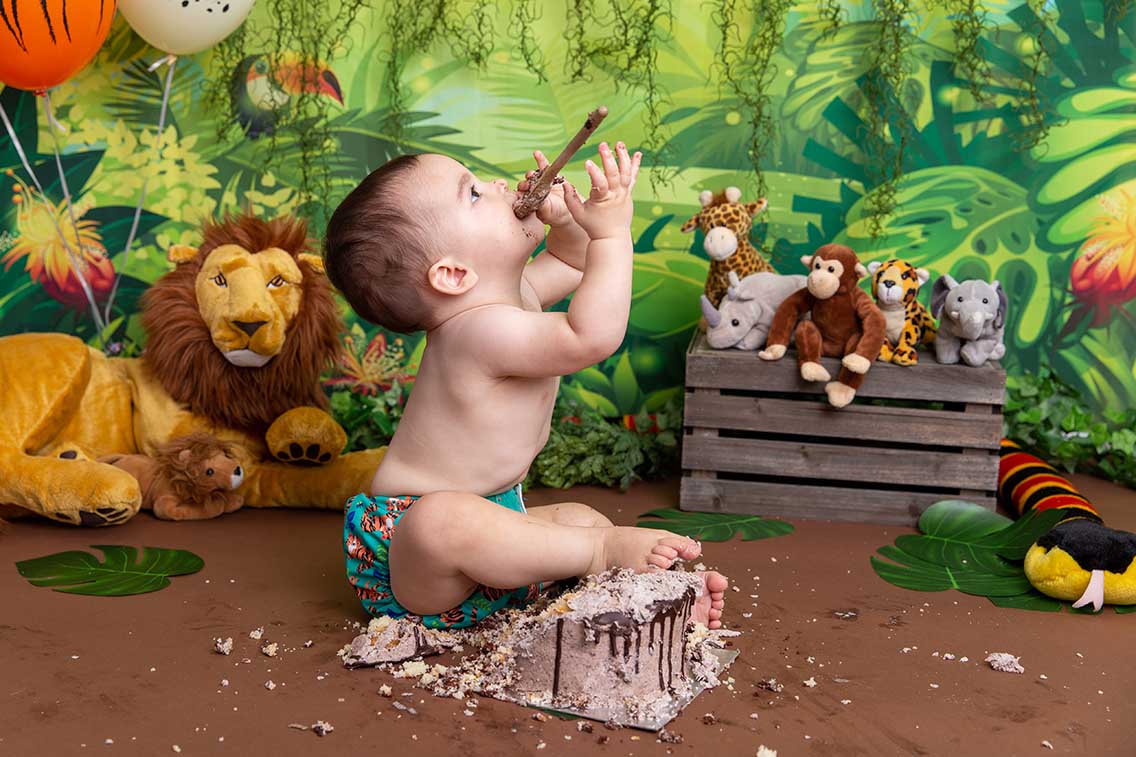 First birthday coming up? Did somebody say… cake?!

This time last year I was photographing Logan as a newborn – isn’t he scrummy? That pout!

It barely seems possible but he is now 11 months old, walking like a pro, and he’s back for his first birthday cake smash.  Currently he’s obsessed with lions and with shouting “Rah!” so although mum had originally thought of a farmyard theme, she decided to change this to a jungle theme I’d done previously – just with a bit of a lion focus!

As soon as I get a cake smash booking, the planning starts.  Each set is created individually with the right backgrounds and props.  In Logan’s case, the jungle theme I originally did just needed some tweaking to make it more lion-focussed (and yes, we know you don’t get lions in the jungle, but it’s Logan’s birthday so he gets what he wants!)

When I start creating a set, it’s pretty chaotic.  Once I’ve decided on the backdrop and the floor colour, I’ll bring out all the props I might want and start playing until I get a set-up I love.

Once the set is created, I’ll send a picture to mum to make sure she’s happy with it. She can then make choices about outfits and the cake.  Then everything is packed away until the day of the cake smash!

Logan’s smash is scheduled for well before his usual late morning nap.  However babies never quite run on the schedule you want them to! He arrives a bit on the tired side, with some teething going on and a bit of a snotty nose.  It’s fair to say he’s not feeling 100% so I take time talking to him, being silly, playing and encouraging him to explore.  This is why I never schedule more than one session a day. You never know how long you’ll need, and I never want parents to feel rushed.

With mum sitting close by, he soon feels comfortable enough to sit on the backdrop. Once we’ve found toys that he likes, he’s happy to play with them while I swap out birthday props around him to get as many good “before” shots as I can.  This is often a tricky part for babies – they like to keep crawling back to where mum and dad are waiting on the sofa! So often I’ll let parents sit a bit closer, to keep baby in the right place.  We sing his favourite songs and let him hold whatever he wants to.

Once I’ve got a good gallery of “before” pictures, I get the cake ready while mum changes Logan into his second outfit.  She has prepared him well at home by making sure he’s used to the texture and sweetness of cake and icing, and allowing him to get messy with his food. Quite a few babies are overwhelmed by the sugar and mess if they’re not used to it.  Once he’s ready, we pop him behind the cake and get ready to capture those first expressions.

The first few images are nearly always the same, like a story. I think of them as a sequence:

Logan is one of the most curious babies I’ve known – he likes to hold things up, look them over. He really stares at new things while he tries to work them out.  So it comes as no surprise when he wants to lift the cake up!

He soon digs in happily and although he doesn’t want to eat much of it, he definitely wants to play with it! I always give babies a wooden spoon as they love to splat the cake, bang the floor and suck cake off the end of the spoon.

For the next 20 or 30 minutes we let Logan play with the cake as much as he wants – and boy does he want to play with it! He forgets all about being tired and has a fantastic time.

Once he’s demolished most of the cake and had enough to eat, he walks off the set a few times. This is usually my cue that baby has had enough.  So it’s time for me to clear away the mess and run a bath.  Sometimes I’ll pop down a different floor, but the brown works well here for our jungle setting so I leave it in place.

After checking that mum is happy with the brand of bubble bath and the temperature of the water, we pop Logan in. There’s a quick clean up, then we get some smiley bathtub pictures.  It’s incredibly rare that babies don’t like this part of the session – most of them absolutely love a warm bath. And they are allowed to splash as much as they like!

Bath-time lasts about ten minutes and then it’s out to get dried and dressed.  A very tired Logan is ready to sleep on the drive home!

Now all mum and dad have to do is a quick bit of paperwork and to wait a couple of weeks for their images. Happy birthday Logan! 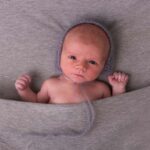 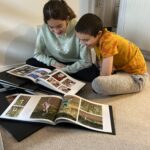 Next post Thinking about a photo book for your baby?